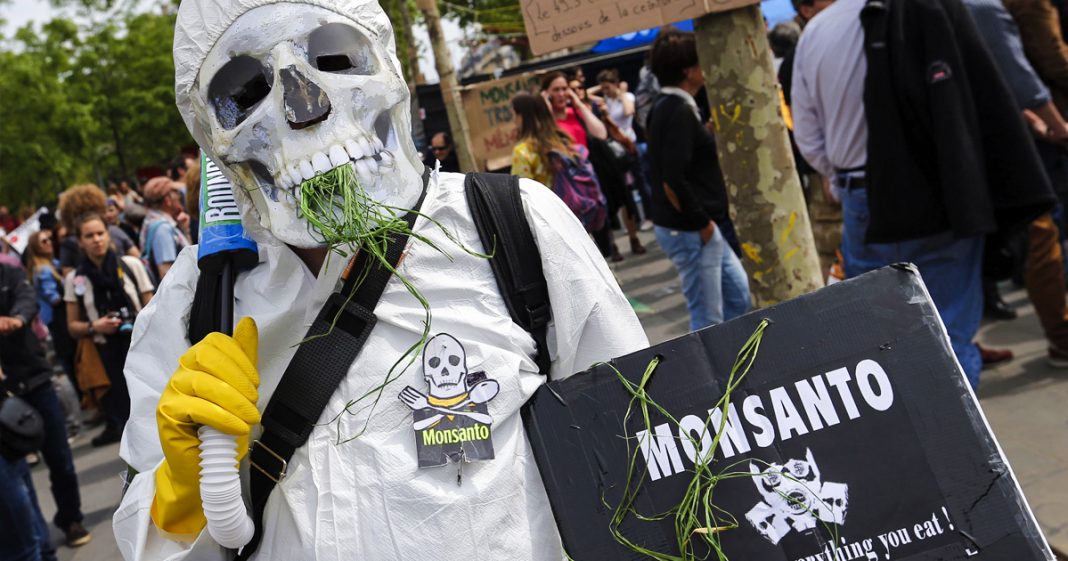 It seems that each and every week we find out more and more about the extreme measures Monsanto has gone to in order to keep the cancer risk of the weed killer glyphosate hidden. This time it is the EU food safety and chemical agencies that overlooked the likelihood that the active ingredient in Roundup is carcinogenic. Instead of independently reviewing data, two key European agencies relied on studies conducted by glyphosate manufacturers.

Christopher Portier, former associate director of the National Institute of Environmental Health Sciences (NIEHS) wrote a letter, dated May 28, to EU Commission president Jean-Claude Juncker accusing the European Food Safety Authority (EFSA) and the European Chemicals Agency (EChA) of ignoring crucial evidence when they declared that glyphosate did not need to be designated as a carcinogen. In the letter, Portier claims that key pieces of evidence were not taken into account:

“I firmly support the principle that scientific evidence should be used to help guide societal decisions about health risks to humans. However, the individual scientific studies must be carefully summarized and reviewed if their findings are to serve as a true guidance. The glyphosate hazard classification appears to have been a good example of how lack of transparency regarding the scientific evidence that underlies important public health decisions can erode public trust and raise concerns.”

The studies cited by the EChA and the EFSA were substantially conducted by the Glyphosate Taskforce, who counts Monsanto, Dow Agrosciences, Syngenta, and Barclay Chemicals among its members. The chairperson for the organization is Dr. Richard Garnett. Dr. Garnett also holds the title of “Global Crop Protection Regulatory Affairs Strategy Lead” for Monsanto, essentially Monsanto’s lobbyist. That’s right, the studies that said Roundup was safe to use came from Monsanto lobbyists.

That government commissions could possibly steer the public wrong on the dangers of Monsanto’s chemicals should be shocking. But sadly, it isn’t. In recent months, we have learned that Monsanto would write their own studies and pay scientists to sign their names to them. We also found out that an official in the EPA, Jess Rowland, boasted about killing an investigation by the US Health and Human Service Department into the carcinogenic effects of glyphosate. Talking to a Monsanto regulatory affairs manager, Rowland bragged:

“If I can kill this I should get a medal.”

Now after analyzing data, Portier says that it is clear that two agencies within the EU failed to acknowledge that studies showed an increase in tumors in rodents, instead relying on unpublished studies coming from the chemical makers themselves:

“I found eight significant increases in tumor incidence that do not appear in any of the publications or government evaluations presented by both EFSA and EChA.”

Portier’s letter comes at a crucial time as the European Commission cited the EFSA and EChA’s research when it announced that it will seek to grant a 10-year extension to its existing approval of glyphosate. However, that measure has not gained the support of all of its member states and a long-term decision has been delayed several times.

In 2016, the European Commission had to settle for a temporary license extension of 18 months after as many as 11 countries, as well as the European Parliament have opposed the re-approval of glyphosate, without significant restrictions.

Last year, the European Parliament asked that glyphosate be limited in its use. They called for an outright ban on the private, non-professional use of the chemical and that it not be used close to or in public parks, playgrounds, or gardens.

While the EU debates the approval of the chemical, some two-thirds of Europeans already support a ban on glyphosate. The Guardian reported on a 2016 Yougov poll that showed:

A prohibition on the herbicide ingredient was backed by three-quarters of Italians, 70% of Germans, 60% of French and 56% of Britons, in a survey of more than 7,000 people across the EU’s five biggest states.

Glyphosate is probably carcinogenic, according to the World Health Organization’s International Agency for Research on Cancer. A majority of people want to see it banned. Several countries do not even want it used near children. So, why is there still a debate? Just follow the money.

Worldwide, glyphosate and herbicides make up about one-third of Monsanto’s annual revenue, bringing in over $4.76 billion. Seeing Europe ban the chemical would not only hurt sales directly, but could also add to the growing unease across the globe over the product.

In the US, lawsuits are ongoing against the troubled chemical giant, as more and more cases of people who worked with glyphosate are shown to be suffering from Leukemia, non-Hodgkin’s Lymphoma, Multiple Myeloma, and other forms of cancer. Farmers, agriculture workers, landscapers, groundskeepers, and even gardeners have shown signs that using Roundup and products like it could have deadly consequences.

Ring of Fire’s Mike Papantonio and his firm, Levin Papantonio, are already working to hold Monsanto accountable. Those that have been exposed to Roundup and have been diagnosed with cancer are encouraged to click this link: Roundup – Cancer Link for more information.