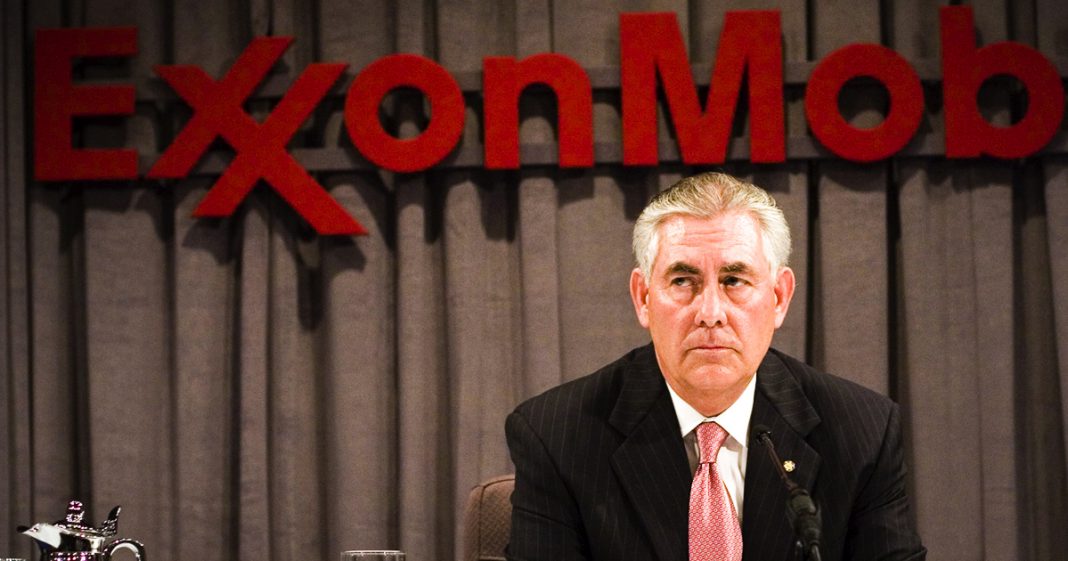 In the shadow of the Trump Administration’s recent twelve-figure arms deal with Saudi Arabia, Exxon-Mobil – the company of which current “Secretary of State” Rex Tillerson was CEO before resigning to take his current position – signed its own deal with the Saudi Basic Industries Corporation (SBIC).

The deal involves a feasibility study of a facility near Corpus Christi, Texas that would employ high heat and pressure in order to convert natural gas into plastics. Once up and running, the facility will be the largest fracking operation in the world. The plant would be jointly owned by Exxon-Mobil and the SBIC.

The project, which would be located less than two miles from public schools, has generated a great deal of controversy among local residents. Meanwhile, the deal between Exxon-Mobil and the SBIC is raising questions of its own – namely, why was former CEO Rex Tillerson in the room when the deal was signed?

In a letter submitted to the State Department during his confirmation hearings, Tillerson stated that he would not,

“…participate personally and substantially in any particular matter involving specific parties in which I know that ExxonMobil is a party or represents a party, unless I am first authorized to participate, pursuant to 5 C.F.R. § 2635.502(d).”

The particular law he cited clearly says that federal employees (including Cabinet members) cannot be involved in business matters that affect their own interests when those matters involve the government and could result in a conflict of interest unless they have permission from the agency at which they are employed.

Here is an example from the Cornell Law School’s Legal Information Institute: suppose John Smith is working for the Securities and Exchange Committee and is assigned to investigate insider trading at Dewey, Cheatham & Howe (DC&H), a financial services company where he was recently employed as a hedge fund manager – and where he still has friends. Maybe Smith is even planning to go back to work there once his tenure at the SEC is over.

Do you think there might just be a potential conflict of interest here? It would of course be up to the head of the SEC to determine whether or not such a conflict of interest exists, and if Smith should be pulled from the investigation. Of course, if that head of the SEC – let’s call her Susan Jones – had her own brokerage account at DC&H, that would muddy the waters even further.

In normal times, this scenario would be highly unlikely. But as we know, these are anything but normal times.

Of course, it is well known that under Tillerson, Exxon-Mobil nurtured a cozy relationship with the Saudi government. But also keep in mind that the one who essentially hired Tillerson for the job of Secretary of State was none other than Trump, who himself has numerous financial interests in several fossil fuel companies – including as much as $100,000 in investments with Exxon-Mobil.

It turns out that Trump was in the room as well when that deal between Exxon-Mobil and the SBIC was signed.

Naturally, neither the White House nor the State Department have any comment, except to claim that Tillerson continues to “honor” his “recusal” – insofar as this kleptocratic Administration has any “honor” or even knows the meaning of the word. Tyson Slocum of Public Citizen summed it up best when he said:

“The president’s Saudi trip was a bizarre Art of the Deal-esque foreign policy disaster: a sleazy mix of conflicted government-arranged corporate endorsement deals…Trump and Tillerson’s Riyadh embarrassment is just another sad indication of the administration’s prioritization of crony corporate access masquerading as a jumbled assembly of foreign policy and economic development.”

Tammany Hall was at least pretending to do something for disenfranchised Irish immigrants, back during the First Gilded Age. The Trump Crime Organization isn’t doing a damn thing for anyone but themselves.