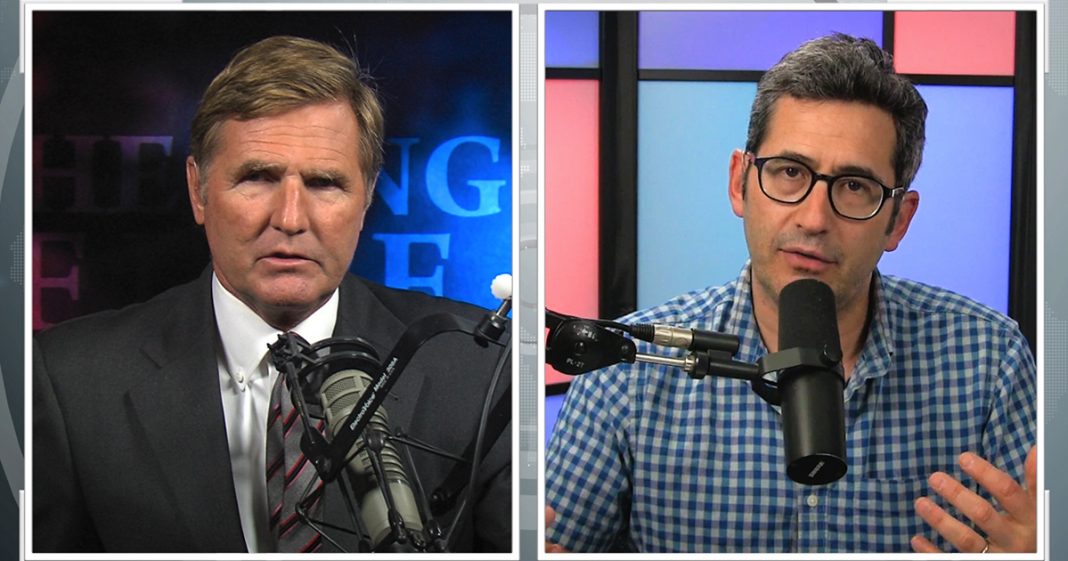 Ring of Fire’s Mike Papantonio & Sam Seder talk about the fight against Big Pharma when it comes to opioids and the tremendous cost associated with these painkillers.

Sam: So Pap, we’ve been talking about the opioid addiction epidemic that we have been undergoing in this country now for many years at this point, and it’s only been in the past couple of years I think where there has been an awareness of what was the dynamic that created this widespread addiction, not just for prescription painkillers, but for heroin, which ended up being basically a replacement for these prescription painkillers.

You were explaining to us that the way that this stuff gets put out there, the way that this addiction happens, is that first off, the company manufacturing the drug claims that it’s not addictive, even though initially it was set to be prescribed for acute situations, just coming out of surgery, perhaps maybe dealing with certain types of cancer, pain associated with that, for short periods of time. They come in and say, ‘This is not addictive,’ and in fact, Dr. Jones down the street, he’s finding it’s very effective if you’ve got a bruised leg or something, or he’s got a patient who had a surgery on his colon, and he’s been on it for six months.

Pap: Yeah, so give him Oxycontin for a few days, he won’t have any problems with it. Well look, when these companies were making these representations, the lawyers who were making the representations to the FDA, the medical officers who were supporting those representations, and the executives for the company all knew, every one of them knew, that they were lying. There’s no other way to dress this up. Their own information showed them how addictive it was, so they thought, ‘Well, okay. If we can push it through the FDA even though the FDA was hesitant, even though they said, Well, gee we think it’s addictive, but we’re going to back and show you it’s not addictive.’

Then once they got it into the market, once it’s there, the real problem that people always miss is what they call the tail of the event, and that is where you’re out there, you’re selling it, the lie is out there, and the tail is how long does it take people to catch up with the fact that they lied to us four years ago? It takes a very long time, and in the process the company continues going off and telling doctors, ‘You can use it for everything, doctor, not just acute situations. Use it for everything. They’re going to be fine. There’s no addictive quality to it,’ and it’s as addictive as heroin, and companies knew it, Sam. They knew it.

Sam: Okay. Let me ask you this, because we know that the state of Ohio is as of this week, is suing five major drug manufacturers because they misrepresented this. We also have a situation where you have literally, I don’t know what the ratio is, but some crazy ratio of pills to people in places like West Virginia. What is, Pap, from the standpoint of an attorney, from a plaintiff’s attorney, who’s going to go and hold these companies to account? It’s one thing when they go in and misrepresent what they know is false about the addictive qualities-

Pap: Yeah. You can do it with statistics, Sam. You can say, ‘Look, you knew, Purdue, that you were pushing this much of this product into this neighborhood,’ neighborhood. You can break it down. You’re going to see it. The cases we’re going to be involved with are cases where you actually have communities, like they may be townships, or they may be cities, or counties, where they knew that if you have a population of X that anytime you know the population and anytime you look at the amount of the product going into that population by its very statistical number, they’re flooding it, and it’s intentional.

Sam: So the distributor knows there’s an algorithm?

Sam: There’s no way we can be selling this many pills to this size population …

Sam: … without there being a problem almost definitionally.

Pap: It’s not that they knew … You don’t have to say they knew. You have to say they should have known, they could have known based on the information. Once you get to that threshold, you show the damage. Sometimes this can even be brought in terms of a public nuisance, okay? The public nuisance is you’ve pumped so much of this garbage into our neighborhoods that our children are addicted, the streets aren’t safe, robberies increased, murders increased, crime’s gone up. You’ve created a public nuisance here in our backyard. Now, there’s some obstacles to getting to public nuisance, but that’s generally what you’re trying to show, a county … Now, here’s the real point, Sam. When a county has to pay for all this, the public hospital has to pay for this, the healthcare, the rehab, they have to pay for everything. This is a strong lawsuit we’re going to be involved with for a while, but we’re going to go after the distributors. That’s my focus.

Sam: Right. The doctor’s not aware of it. They’re under the belief that you can’t be addicted, that you’re just dealing with pain.

Sam: Well, it’s fascinating, it is I think encouraging at the very least to see state governments and to see attorneys like yourself deal with this, because it hopefully, even though there are hundreds of hundreds of millions of dollars for these companies to make, even with the cost of doing business of paying out maybe some penalties, hopefully it will slow down and inhibit the use of these things, which are destroying so many lives. Pap, really appreciate your talking to us about that.