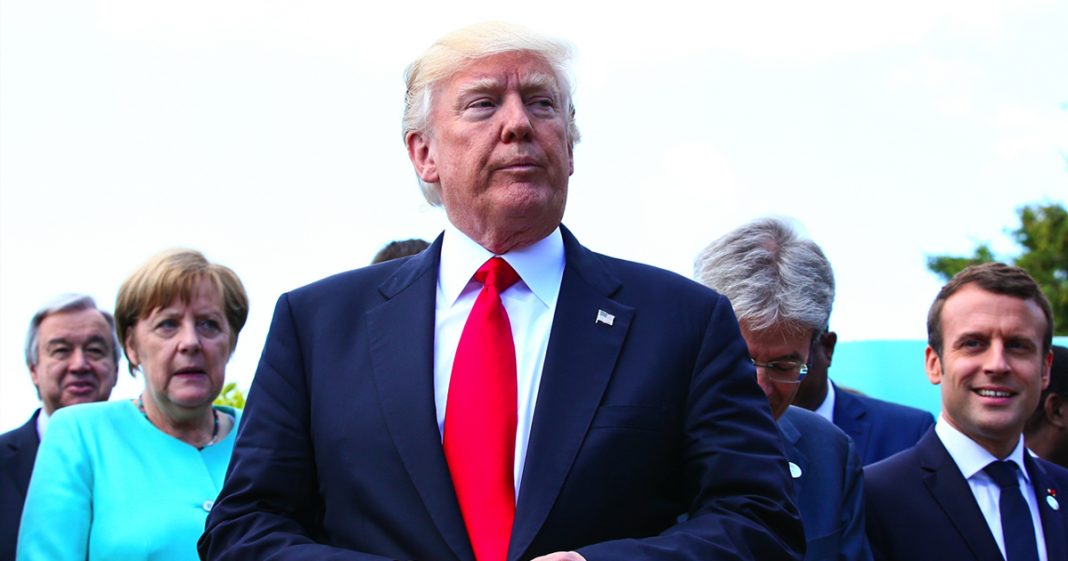 Trump’s trip to Europe was full of strange incidents and even some bizarre behavior. John Nichols from The Nation Magazine joins Ring of Fire’s Sam Seder to discuss Donald Trump’s first foreign trip that ended with a meeting of the G7.

Sam: So John, last weekend into, I guess into the end of last week, we saw the Donald Trump’s first foreign trip, and it ended with a meeting of the G7. Through which we saw a lot of very strange, I guess, physical manifestations of some problems that Donald Trump was having with some of our oldest allies from Europe. I’m speaking, of course, of some handshakes that seem to have gone awry, some shoving that was going on. I mean, before we get to the comments that Angela Merkel made following Donald Trump’s trip, lay out for us what would normally be an agenda for the President of the United States when going and meeting with the G7 nations?

John: Well that’s a very good question. And I think you begin with the concept that there’s nothing normal about Donald Trump, and this is … this should have been an incredibly easy trip for him. It didn’t have to be hard at all. Expectations for Donald Trump, in Europe, are so low, that if he simply came in and said hello, shook a few hands, and did nothing else, the impression of him would have risen. It was almost impossible to do damage to his approval rating, if you will, among Europeans because it’s already so low. So he didn’t have to rise to the standard of a traditional American President. A traditional American President, of course, almost anybody else — Republican or Democrat — would try to come and establish a unique balance; that of being the dominant player in a lot of military measures and a lot of economic measures, but not a jerk. And for Americans, that’s always the balance you gotta strike, right?

You are the representative of a country that has a lot of power, that has a lot of importance and value to the alliance. But you don’t want to come in and be so pushy, so over the top, that people that you need, leaders that you’re going to need for international coalitions, both military and economic, folks that you’re gonna need in diplomatic endeavors, feel put off or feel that you’re not a good partner. That’s what any American President does.

Sam: Before we get to how he did on that accord, I want to just expand on this. Because, you know, what strikes me is that regardless of what possible formulation one, an individual, could have as to where America fits in the world. I mean, regardless of whether or not you have a conservative or a liberal perspective, or an internationalist or an isolationist perspective, the agenda — as you’re expressing it — seems to me to be fairly consistent, which is, that you want to go and meet with these people and put yourself in the best position to influence them in the future. Regardless of what your agenda is, right? I mean, this just sort of like …

John: Absolutely. I mean, this is not complicated stuff. It is not even diplomacy. Diplomacy requires some skill, some knowledge and that. This is just basic human relations. If you’re putting a rock band together, you may be the front man, you may be the singer and you may be the center of attention, but you still want to be decent enough to the bass player, and the drummer, and the keyboard player that they’re working with you. Right? Even if you’re a jerk, you at least want that. Now, the equivalent in that metaphor, perhaps not a perfect one, is Donald Trump went there and he literally told everybody that A) they’re rotten players and he doesn’t want them in the band. And if they are gonna be in the band, they have to pay him, even though he’s getting the advantage with their presence.

It was a bizarre and crudely dysfunctional Pres- … You actually couldn’t have done it worse, and I’ll give you a very simple example. You mentioned some of the physical manifestations, and of course, shoving aside the Prime Minister of Montenegro — a country with which, you know, it’s a small country, but one that’s coming into the alliance, is a important player for a variety of reasons because of its location — and just to be so dismissive, that’s bad. The handshake with Macron was an absurd sort of stand-off, a silly situation there. But the thing that may have been most telling was when they were down in Sicily … and remember, we’re talking about some different things here.

John: We’re talking about some NATO stuff and some G7. But when they were down in Sicily, they always take a walk around dinner time at these events. Whether they’re in the Bavarian Alps, or on some island off Italy. The concept is that they get out and they physically kind of walk along. It’s done, to some extent, for the photographers, to some extent, for image, but it’s also a place where the leaders are a little bit away from all the aides and they have a chance to interact with one another. So they did it in Sicily, and all the other leaders — no matter what their age, no matter what their circumstance — they all walked. Except for Trump, who waited behind until a golf cart was brought up so he could be driven the 700 yards or wherever they went.

Sam: And he looses that opportunity to just even be human enough with these people that he’s walking.

Sam: I mean, I gotta imagine it’s just simply he didn’t have the stamina to make it, but it’s, and I would imagine the problem is as much metaphorical as it is literal. If he was a situation where he had some type of interpersonal skills where he didn’t have this sense of having to prove himself as an individual, as opposed to, you show up, you’re the President of the United States. He seems to have a fundamental misapprehension as to what role he’s playing. He is, for better, for worse — and I would argue for worse — a representative of this country, and he seems to think it works in a different way.

John: Well you’re the dominant person in the world, and you have an inferiority complex. It’s a bizarre … you know, it’s a bizarre circumstance.