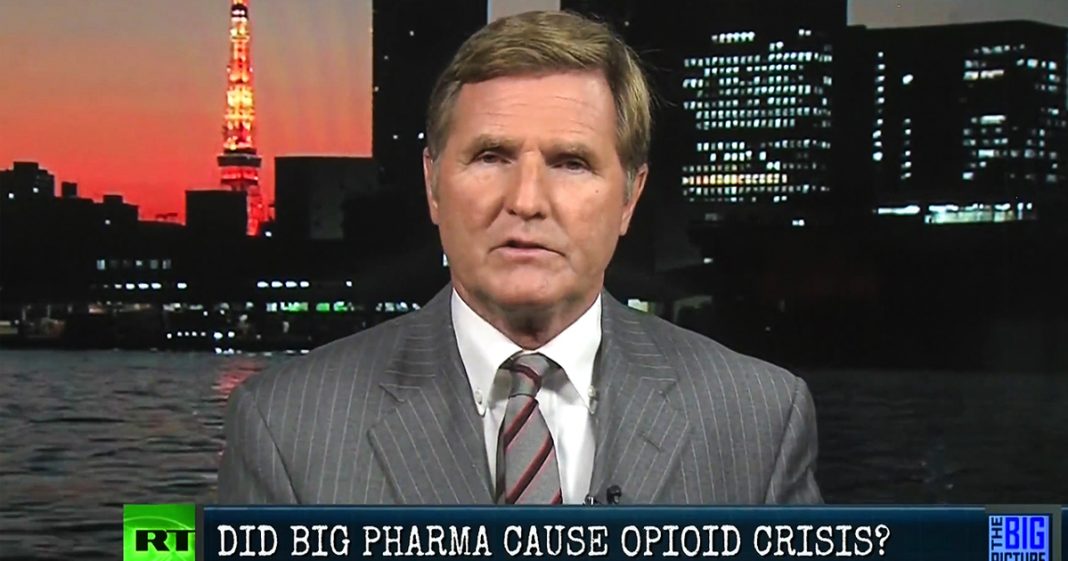 Thom Hartmann: We were talking earlier today about how the new version of Trumpcare was unveiled today sets aside 54 billion dollars to help combat the opioid epidemic. You’re currently part of a lawsuit against big pharmaceutical companies for their role in creating this opioid addiction crisis. Talk about that. How are they responsible for creating this crisis?

Mike Papantonio: Well, it was brilliant, Thom. What the opioid distributors did, people like McKesson and the manufacturers, Purdue, for example, that created this colossal catastrophe. What they did is they understood that they had to sell an awful lot of opioids to make the 25 billion dollars that the industry brings in every year. So, what they did is they promoted the idea of overuse. I’m handling cases in Virginia for counties and municipalities, governments in West Virginia, in Kentucky and in Ohio. And what we find is you’ll have a county where they’ll be 100,000 people and the opioid industry goes in there and the distributors, the people that are what we call detailers, the salespeople on the road, they find all kinds of ways to push their drugs. And, so they’ll have a county of 100,000 people where they’ve sold two million opioids in that county of 100,000 people over a period of about eight months. So, the industry knew that the were creating drug addicts. There’s no question that the information we have so far is overwhelming.

There’s an incredible book I recommend it to everybody. It’s called, “Dreamland.” It’s called “Dreamland” and it talks about how the industry created this catastrophe. What they would do, Thom, is they would figure out, where can we sell drugs? Who are the people most likely to sell drugs? They did a demographic analysis, they said go to white, middle class that is in a declining economy. Let’s go where they’re losing jobs, where the US government is shipping jobs out of the country. Where there isn’t work, where there’s despair. Let’s go to those places because we think we can sell more opioids in places like that.

And they were right. And if you look where they went, the story plays out every time. They did a good demographics analysis. They said who’s going to buy our drugs, how can we sell more drugs? Not just for use of acute pain. These drugs never should have been used for chronic pain. They were made for acute pain. Surgery, two days maybe, after surgery. But right now, this is a startling number, 99% Thom, 99% of all of this class of opioids is sold in America. 99%.

Mike Papantonio: The truth is we have that 99% worldwide. US buys 99% of all these opioids that I’m describing. And we have such an addiction problem, we’ve going got counties that can’t even afford for the medical care, they can’t afford the rehab care. They’re having to build entire new elements to their police departments. Their dependency cases are overwhelming them. They’re taking children away from these addicts. There are cities and counties in this area right now, these areas that I’m describing where 80%, 80% of that city is not just first generation, but sometimes second generation of opioid addicts.

And then comes, after the opioids, or after that’s cured, in comes what we call the black tar heroin that comes from places around Mexico. And they follow the opioid business. Opioid comes in, they target by demographics. The black tar heroin business comes in and simply follows that. To reverse this, a typical county is going to need three hundred million dollars just to solve the problem if they face this problem for more than five years. Three hundred million dollars won’t scratch the surface of what it’s going to take to clean this up. So those are the cases that myself and a brilliant young lawyer named Paul Ferrell, he’s from West Virginia whose come up with the schematics of how to go after these companies. Absolutely one of the most brilliant young lawyers I’ve ever worked with. And so, we’re all involved with trying to bring these corporations into a court room and take away this dirty, disgusting blood money that they’ve made for so many years selling these drugs.

Thom Hartmann: Mike, in the final minute and a half, or two minutes that we’ve got here. What does it say about our justice system that we’ve thrown millions of people in jail for selling pot over the last few decades, but have allowed these giant pharmaceutical companies to created the biggest addiction crisis perhaps in human history. I don’t know the history of the old opium wars but this seems like it’s got to be right up there.

Mike Papantonio: No, it is the biggest in history. Here’s the quick answer. The Department of Justice has always done … They did it under Loretta Lynch, the entire Obama Administration was faced with this. It started about the end of the Bush Administration, and then the Obama Administration, the way they dealt with it was to say to these companies that they knew were pushing these drugs. Well, gee whiz, we’re going to fine you. You’re going to have to pay fines.

But you know what, not one of them went to jail. And we’re talking about overdoses. There’s some communities, Thom, the size of right here in Pensacola, the size of this community that are having 10 to 20 overdose deaths a day. And it’s being ignored by corporate media, of course, because corporate media, you know, they don’t want to tell this ugly story. They’re unwilling to tell this ugly story because their advertisers won’t let them tell this story. So this is handled under the radar for two decades and finally this brilliant young man, Paul Farrell, connects all the dots and says, ‘Well, we’re going to come up with a way to do this.’ So, I’m totally committed. We have probably the best team of lawyers that have been put together since the tobacco wars that are going to go after these corporate thugs.

Mike Papantonio: And that’s the only way I know to describe them after understanding what they’ve done.

Thom Hartmann: That is great. Mike Papantonio, it’s always great having you with us. Thanks so much.