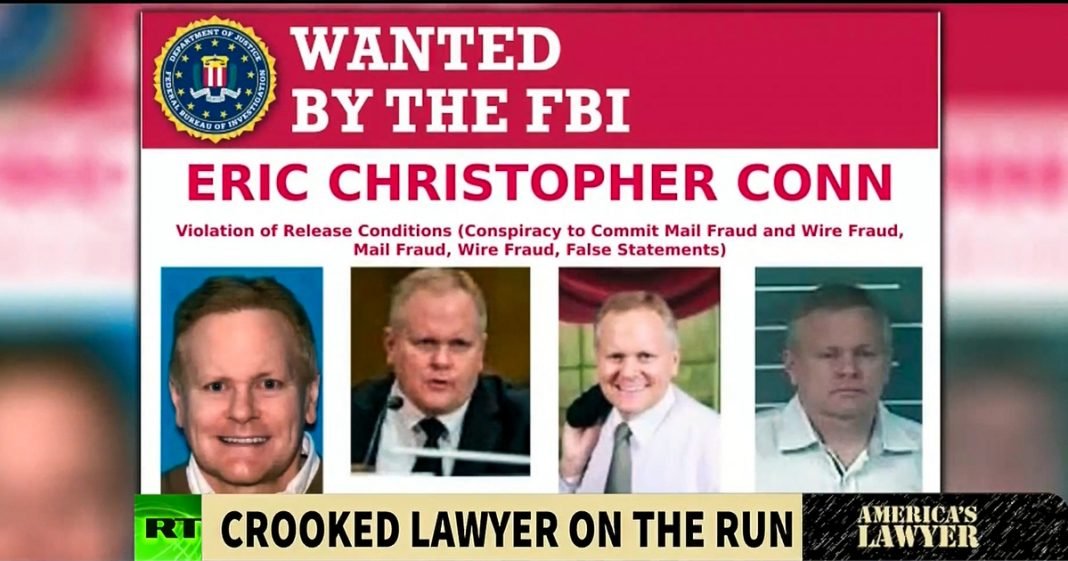 Via America’s Lawyer: Mike Papantonio is joined by Mollye Barrows, Legal Journalist for The Trial Lawyer Magazine, to talk about a lawyer running from the FBI after scamming poor low income clients and the Social Security Administration of millions of dollars.

Papantonio: A lawyer from eastern Kentucky is running the law after admitting to stealing more than $500 million from the Social Security Administration. Attorney Eric Conn is out on bail after his arrest last year for bribing a judge to help his clients win disability claims, which allowed him to then rake in huge profits. The conditions of his freedom are that he had to give up his passport and remain under house arrest with a GPS device, but now he’s missing. Joining me now to talk about this is Mollye Barrows, legal journalist for The Trial Lawyer Magazine. Mollye, first of all, what exactly is the extent of this crime that’s been committed?

Mollye: Fraud. Apparently, according to the Social Security Administration Office, it’s the largest in the program’s history. 550 million is what they would’ve been on the hook for in lifetime benefits because of this scheme orchestrated by Eric Conn, known in his part of eastern Kentucky as Mr. Social Security. Now, ultimately Social Security only paid out almost 47 million, but had this gone unchecked they would’ve been on the hook for $550 million. Basically, he orchestrated this scheme for about 10 years. He put together a corrupt ring of people, if you will, two judges, administrative law judges, doctors, other folks that were involved, basically bribing them to sign off on these claims, these Social Security disability benefit claims using fake medical evidence to sign off and then everybody would get a kickback.

Papantonio: Well, it sounds to me like there had to be some participation inside Social Security to do that.

Mollye: There are allegations. It’s interesting. That’s a whole other sidebar almost from just the basic nuts and bolts of what this guy was up to, but there were two people within the Social Security Administration Office who’d been whistle blowing for years that they suspected something was going with this particular guy and the people involved with them.

Papantonio: What does this mean for his clients? What are the repercussions for the clients? It sounds like it could be a tremendous disaster.

Mollye: It is. It’s tragic in a lot of ways, in fact. There’s an attorney, two attorneys that are representing different clusters of his clients. He had about 1,700 clients, I’d say, and they are suing him in one part to get because they said that he did all of this unbeknownst to them. Many of them have lost their disability payments all together. The government’s freezing them, forcing them to go back through the process to get those claims evaluated. Some people have kept their benefits, others have lost them totally, others, they’re on hold until their cases are reevaluated. Some people, seven people, seven former clients have now committed suicide because those payments have been stopped and basically that’s their only source of income.

I thought it was interesting when I was reading up on this that in that part of eastern Kentucky and West Virginia, disability income payments are one of the biggest sources of income. This is a big blow to not just his clients, but this entire community.

Papantonio: Isn’t part of the problem that people rely too much or they see an ad that says this guy is the Social Security?

Papantonio: Mr. Social Security is on the air.

Papantonio: Somebody sees the advertisement and they say ‘well, I’m going to hire this guy.’

Papantonio: Because they hire from simply seeing an advertisement.

Papantonio: Isn’t the lesson here, look at the advertisement, take a minute, go on the internet and find out what the backstory is on this guy? I can promise you with this particular case, they would’ve found out what they were really dealing with.

Papantonio: It’s really a shame that you have these lawyers that spend a gazillion dollars advertising and it’s name recognition and people react to name recognition alone, rather than saying let me go look and see what this person’s about.

Mollye: He knew his audience too, that they were poor, that they wanted these disability claims, and so he did it in a very flamboyant way. He even hired a bluegrass musician and hired a YouTube artist as well, a different woman all together, to basically present himself as this guy who was an everyman, so he attracted everyman clients who desperately needed the money who probably wouldn’t even think to look into his background.

Papantonio: Well quickly, what are the charges and sentencing that this guy? They’re going to find him.

Papantonio: Mr. Social Security is going to be found.

Papantonio: What’s he going to face when they do find him?

Mollye: Well, he had a plea deal back in March that among the charges that he pleaded guilty to were wire mail fraud, accepting payments basically, bribing people, destroying evidence because he destroyed a pile of evidence. Basically, he was facing up to 12 years. Now, that could all change when he gets caught again or if they catch him. They expect that they will. Some of those, that plea deal was based on what they did before he tried to escape. If they catch him, that’s going to add some more charges to his case.

Papantonio: It’s one to be written yet.