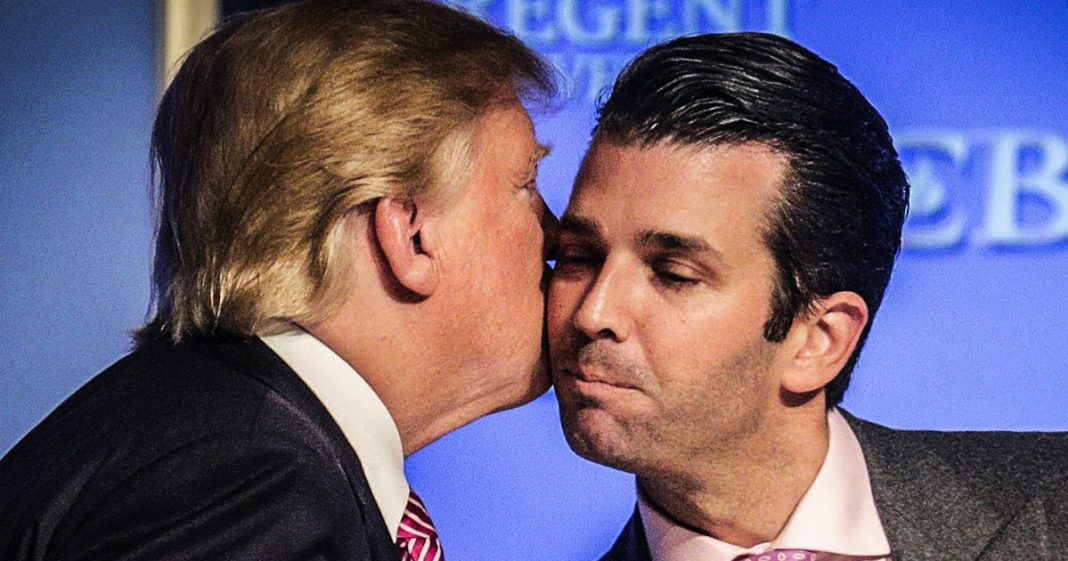 According to Jay Sekulow, the meeting that took place between Donald Trump, Jr. and a Russian lawyer was actually the fault of the Secret Service. As Sekulow says, they should have stopped this meeting if they thought it was nefarious. There’s only one problem with his logic – the Secret Service wasn’t protecting Donald Trump, Jr. at that time and had no say in what he said or did. Ring of Fire’s Farron Cousins discusses this.

This past Sunday on ABC’s This Week program, Jay Sekulow, who is a member of Donald Trump’s legal time, said that it was actually the fault of the US Secret Service that the meeting between Donald Trump Jr. and a Russian lawyer and a former Russian intelligence official, it was the Secret Service’s fault that this meeting ever happened. According to Sekulow, if this meeting was nefarious, the Secret Service absolutely should have just stepped in and put an end to it because, after all, the role of the Secret Service is not just to provide physical protection for those under Secret Service protection, but it is also an investigative unit. They should have absolutely looked at this, said, “Hell no,” and not let the meeting happen if it were nefarious. The fact that they didn’t step in, according to Sekulow, proves that this meeting was as harmless as can be.

It’s an interesting argument and I’m sure it’s an argument that the Sekulow and the rest of the legal team are prepared to make in court if necessary. But the truth is, at that time, in June 2016 when the meeting took place, Donald Trump Jr. was not under Secret Service protection, which means he did not have to clear any meetings through the Secret Service. He did not have to alert them that things were happening. He did not have to tell them who he was going to be with, where he was going to be, or what he was going to be doing. Do you see the point I’m trying to make here? Donald Trump Jr. did not tell the Secret Service about this meeting because he didn’t have to. They weren’t protecting him. They didn’t know about it. Their only job in June of 2016 with regards to the Trump family was protecting Donald Trump himself.

So, Sekulow’s argument, his legal argument, falls apart on its face because people aren’t willing to look up and see that, oh wait, Trump Jr. wasn’t covered by the Secret Service during that time. At least that’s what Sekulow is hoping people will do. However, all of the news stories talking about this since then have pointed out that fact. But here is what he is trying to do, and we have seen the Trump administration doing this for the last week, we’ve seen them doing it for a longer time, but last week it really got put on steroids. They’re trying to blame everybody else other than Donald Trump Jr., Kushner, and Manafort for this particular meeting.

I mean, towards the end of last week, Donald Trump himself was trying to blame Hillary Clinton for it, saying, “Why does this matter? If they’re not going to investigate Hillary, why are they investigating this?” Or, here’s another little theory poking around on Fox News and other right-wing websites. This meeting was actually set up by the Democrats in order to take down the Trump administration. Any form of misdirection they can use is what they will go with. It doesn’t matter if it’s completely absurd because plenty of right-wing news outlets have even said that the Democratic set up conspiracy theory is absolutely absurd. But that’s not going to stop them. Right now, they’re just throwing the spaghetti at the wall, seeing what’s going to stick, what works best with the American public, which one are they going to buy into out of our countless lies about this particular meeting.

Because the bottom line is this. This meeting was bad. It makes the Trump administration look bad. It points to possible collusion between the campaign and people from Russia. There is no way to spin it to make Donald Trump Jr., or Jared Kushner, or Paul Manafort, or anyone else look like they were just a simpleton that somehow got duped by an outside source. The Trump administration knows they screwed up and they’re using whatever trick, tactic, they have to convince the public that it wasn’t their fault.