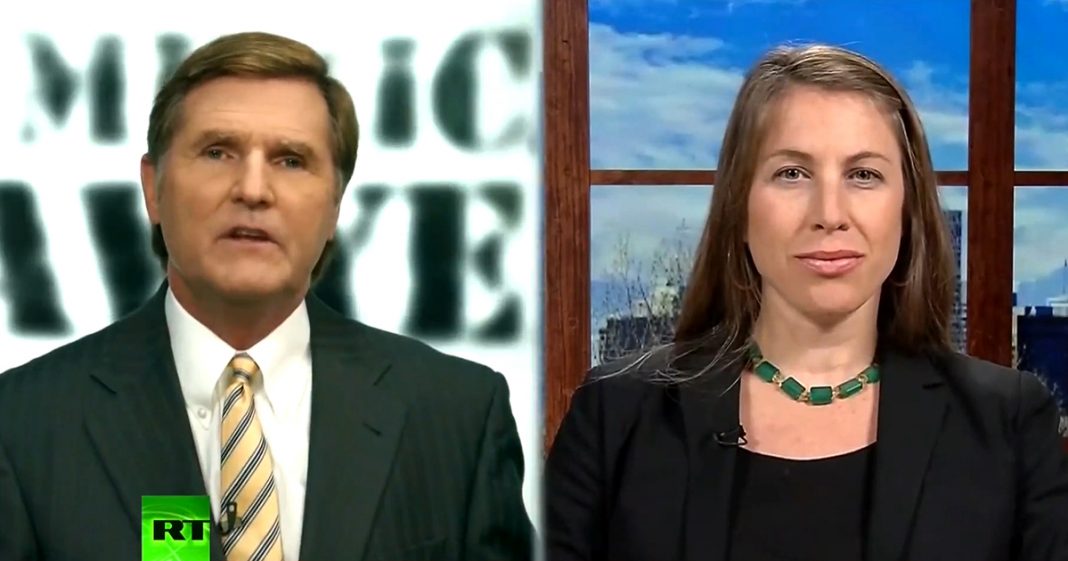 A lawsuit that has been in the works since 2014 has just been granted class-action status by a federal judge. That means the suit now covers up to sixty thousand immigrants who have been detained by immigration and customs enforcement. The suit specifically targets GEO group, one of the largest private prison companies in the country — and claims that detained immigrants were forced to work for a dollar a day or less — a violation of anti-slavery laws. Mike Papantonio is joined by Nina Disalvo, Executive Director of Towards Justice, to discuss this suit.

Papantonio: A lawsuit that’s been in the works since 2014 has just been granted class action status by a federal judge. That means the suit now covers up to 60,000 immigrants who have been detained by immigration and customs enforcement. The suit specifically targets GEO Group, one of the largest private prison companies in the country, and claims that detained immigrants were forced to work for a dollar a day or less, which is a clear violation of anti-slavery laws in the United States.

Joining me now to talk about this suit is Nina Disalvo, executive director of Towards Justice, a worker’s rights organization involved in the suit. Nina, can you start by outlining why it’s so significant that this suit was granted class action status and the specific laws that the suit maintains are being violated? How does all this fit together for the immigrant?

Nina: The granting of the class action certification is tremendously important for the vindication of the rights of these detainees and workers. It’s our understanding that these practices have been going on for a very long time, decades perhaps, and up until this point nobody has been able to complain until our lawsuit was brought. That just demonstrates how unlikely it is that without the class action mechanism, current and former detainees held by GEO in their Aurora facility here in Colorado would be able to vindicate their rights.

At this point, our clients allege two central violations. The first is a violation of the forced labor protections in the Trafficking Victims Protection Act, and the second is a violation that led to GEO’s unjust enrichment on the backs of its captive workforce.

Nina: That’s a really good question, because I think a lot of people immediately think of work conducted by prisoners in a prison. An immigrant detention center is very different. An immigrant detention center is holding people who are either suspected of or found to have violated the immigration laws. That’s a civil violation. It’s not a criminal offense. Some people are detained awaiting determination of their immigration status, and may actually be found to be in this country legally after some period of detention. Other people are detained awaiting deportation or other proceedings. Regardless, none of them are being detained as would be related to any criminal violation.

Papantonio: First of all, isn’t that an important distinction as you go forward and argue this lawsuit? As soon as you hear it, the average American says, ‘Oh my gosh, they’re in prison, they must have done something wrong.’ The truth is, they’re there really for breaking civil laws where it comes to their status of being in the United States. I think that’s one big difference here.

Talk to us about how it is that you’ve got low, non-existent wages. They’re not unique to immigrant detainees, we know that. Most federal prisons, they don’t earn any more than $1.15 an hour. Why would the anti-slavery statute only apply to immigrants that are being detained? What’s the difference here? People are used to seeing road crews where prisoners are working for $1.15 an hour, but this is a little different, isn’t it?

Nina: Yeah, this is absolutely different. I think you really hit the nail on the head, the difference is between being a civil detainee … Breaking a civil law, we’ve all probably broken a civil law when we got a speeding ticket, and no one can then force us to work, whereas the 13th Amendment of the US Constitution, which bans slavery, contains an exception for folks who have been convicted of a crime. That exception has no place in the GEO immigrant detention center where they’re holding civil immigrant detainees.

Papantonio: GEO has made this into an industry, haven’t they? This isn’t the first time that we’ve heard about this company being in the news for something that looks a little hinky. Tell us a little bit about GEO. Why is it that we’re not paying more attention to this? This is not a story that you’ve seen. You certainly haven’t seen corporate media reporting this story in any big way. Tell us why this has been below the surface.

Nina: I think you really made the point in the very first question, which is why is it so importation that this case has been certified as a class action litigation? It’s really because Towards Justice is representing such a vulnerable group of individuals who, up until this point, haven’t been able to defend their workplace rights as regards to the work that they are conducting while detained by GEO. We just have this dramatic imbalance of power between GEO and the folks who are detained at their facility.

I think oftentimes, and we see this in other contexts at Towards Justice where we’re representing low-wage or immigrant workers, workers may not recognize the rights that they have. They may not know what their rights are, so it’s really important worker education to make sure that people know what their rights are so that they then have the opportunity to defend them.

Papantonio: President Trump’s vowed to deport somewhere between two and three … It changes every day, but somewhere between two and three million undocumented immigrants. If you’re able to achieve a victory in this suit, how might that impact how immigrants are treated when they’re in custody right now? In other words, is there going to be a different attitude with a company like the GEO Group? It’s almost like a wink and a nod, ‘You have permission to do what you want to do.’ Are you already feeling a difference there with this administration?

Nina: I think this administration’s plans to more rapidly round up and deport more people who are living in this country, it really makes our litigation even more urgent. To the extent that GEO is in fact engaged in forced labor at their detention facility in Aurora, we want to know that sooner so that we subject fewer people to those types of practices.

Just to go back, the types of practices that our clients are challenging in this lawsuit, one is GEO’s policy implemented in Aurora of requiring detainees to clean large areas within the facility. Not just their personal cells or beds or areas, but communal eating quarters, communal bathrooms, showers, toilets, and all of that janitorial work is done under threat of solitary confinement. That is, if you don’t want to or you, for whatever reason, refuse to work, you will be threatened with or placed in solitary confinement. Our clients allege that that’s a clear violation of the forced labor provisions of the Trafficking Victims Protection Act.

Papantonio: I have a prediction, and that is that you’re going to be very, very busy in the next four years trying to look out for the rights of these folks. Anyway, thanks for being out there. We appreciate that.

Nina: Thanks so much for your time.