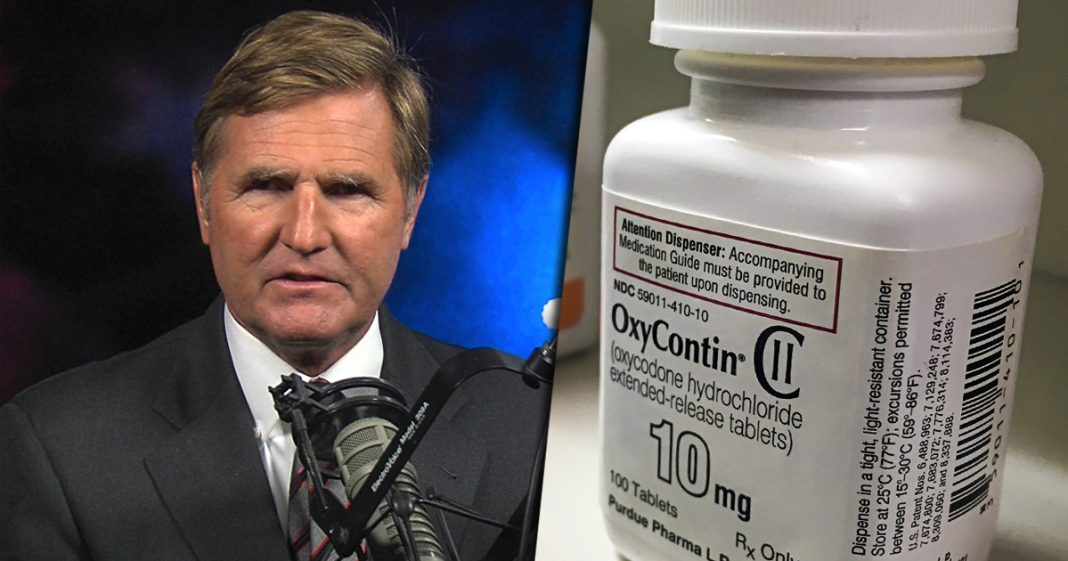 Ring of Fire’s Sam Seder and America’s Lawyer Mike Papantonio talk about the Opioid addiction in our country and how state Attorney Generals from all over the country are aiming to recoup the enormous cost associated with this epidemic.

Sam: So Pap, one thing that I want to talk about in the context of what’s going on that to a certain extent is we felt the impact in this past election has been the rising death rate amongst white men in their 40s and 50s. That has been fluctuating a little bit over the past couple of years. But largely this is a function of a huge spike in overdoses and that relates to massive amounts of opioid addiction in this country.

To a large extent this is created a sense of hopelessness that in many instances causes people to not worry about voting for someone like Donald Trump who may, gosh knows, do what to our government because they can’t perceive of things getting any worse.

Donald Trump says it’s a function of heroin coming in from Mexico, but that’s not really the case, is it?

Pap: Well, no. You heard … Look, you heard a lot of congressmen who were running for office and senators who were running for office that were in heavy opioid land. Where the opioid crisis is out of control. During the election that was the talk, after the election it disappeared because Big Pharma, as they always do, came in and started spreading around money. ‘Mr. Senator if you will shut your mouth we will back you in the next election. Just all you have to do is hush. Don’t talk about all these dead people dying from opioids.’

But look, Pharma created a crisis that’s claimed the lives of tens of thousands of American’s every year, Sam. I think in 2015 there are more than 52 thousand deaths in the United States who were directly attributed to overdose opioids. About two-thirds of those deaths came from legal prescription drugs. Two-thirds. Two-thirds came from legal prescription drugs.

That’s more people than died in auto accident or firearms in the United States. And it may not seem like these deaths were Big Pharma’s fault when you first look at it, but it is absolutely Big Pharma’s fault. The argument is-

Sam: Because I think people just … They don’t understand how it could be the pharmacological company’s fault.

Pap: Let me tell you how it is, okay? Purdue comes up, nobody ever heard of Purdue. It’s a little upstart company. They come up with Oxycontin, they do more political influence then ever, trying to get the FDA to overlook the fact that when the FDA first looked at Oxycontin they said, ‘You know, this stuff’s bad. I mean, we can’t put this out there. It’s too addictive,’ and then they do their PR lobbyist thing and all of the sudden the FDA does what they always do, they cave in and say, ‘Oh yeah, well maybe we got it wrong. We’re gonna allow the sale of it.’

The first year I think the company made like 148 million, something like that, 150 million. But by the third year they were making two and three billion dollars a year because the FDA became the endorsement of legal drug pushers. When you start digging into the issues it becomes clear the drug company executives knew that this was gonna happen. There’s no questions. The documents show it. They were concerned about it. But they did nothing because they knew that this was a get rich quick scheme. There’s a direct correlation between the increase in opioid prescription and the increase of overdose deaths in the United States.

There’s not guesswork. I mean, all you have to do is we charted it out. We’re handling these cases for governments throughout the country and when you chart it out there’s this correlation is overwhelming. It’s a correlation that drug companies executives known about, but they saw it … You see, we may look at that and say, ‘Oh, this is terrible.’ No, they looked at it, they had the same projection. Sam, they had these projections after the first year of sales. They could extrapolate if we go to particular areas with these particular social issues, then we’re gonna dump drugs into this particular area and we’re gonna make money.

They had it analyzed down to the area of the country. Like West Virginia for example. Or Southern Ohio.

Sam: I want to get to those places in a moment, but what existed before? I mean, how is it … Because presumably, right? These people aren’t going to buy this Oxycontin or Fentanyl-

Sam: -over the counter, right? They’re getting it prescribed by a doctor.

Sam: So what changed? What did doctors used to do? How did they get duped?

Pap: Here it is, there’s a term. Sam, there’s a term. There’s a term called “Off-Label.” Off-label means … Where you typically see off-label is a drug company has come up with a new product, okay? But they can’t sell enough of the product if they just use it for a narrow thing, such as when Oxycontin was coming they used … It was very specific, okay? It was used two days, three days after major surgery and then no more, okay?

Then all of a sudden the detailers and the drug companies come in and say, ‘You know, you don’t really have to worry about that,’ because their big push was that it is not addictive. Their role in this crisis, you’ve gotta go back to 1990s when the opioid based painkillers were first released. At that time the FDA doctors groups, and even the drug companies sales reps, were … by the documents it shows very clear they were concerned about the addictive quality of the opioids.

They understood that patients could easily become addicted to the painkillers, pills were too easy for patients to overdose on, but rather than the FDA demanding that the drug companies carry out extensive testing they caved in like they always do and these groups are more than happy to accept … doctors are more than happy to accept drug companies assurances and they went out, Sam, and they lied to the people that they were selling this to for easily a year and a half.

Just out and out lied and said, ‘Look, we’ve tested. These painkillers are less addictive than other opioids.’ And that’s all it took. That one lie from the drug companies, a lie that continued for more than a decade, really. There’s something that’s called a tail, there’s a tail of an event. The event is the drug company going out and saying, ‘Don’t worry about. They’re not addictive.’

Now the tail of that is how long does that message-

Pap: Exactly. And how long does it take to correct that tail that follows the message? Look, this is absolute a 101 Marketing. They know that, they understood it, so what they’ve did is ‘If we can get them started, we can get these doctors started using this for things that know it should not be used for, and we can have the doctors believing that it’s not addictive, then we’re gonna be okay because the hold will take place.’ Their doctors told them that these pills, when a patient would go, these pills weren’t addictive because the drug companies told doctors that they weren’t addictive.

Pap: In fact the drug company Purdue who makes Oxycontin had to pay 600 million dollars, which is nothing, in 2007 after a lawsuit proved that executives, especially the lawyers who were working for the company, and medical officers who were working for the company, were absolutely lying. Nobody has gone to jail over it, the lawyers still have their licenses, the medical officers still have their license, but they were lying when they told doctors and the public these pills were less addictive and more effective than other painkillers on the market.

Purdue knew they were exaggerating the effectiveness and once you get hooked, Sam, everybody said, ‘Oh gee, I can just stop.’ No. This drug isn’t built like that. This drug is built to grab you the same way heroin will grab you. As a matter of fact, what we find is when they pull opioids off the market in an area like West Virginia where it’s used heavily or Southern Ohio or Kentucky or some of these Southern states, they find that the thing that comes in next is heroin. Because they are so hooked onto the exact same feeling that the Oxycontin gave them.