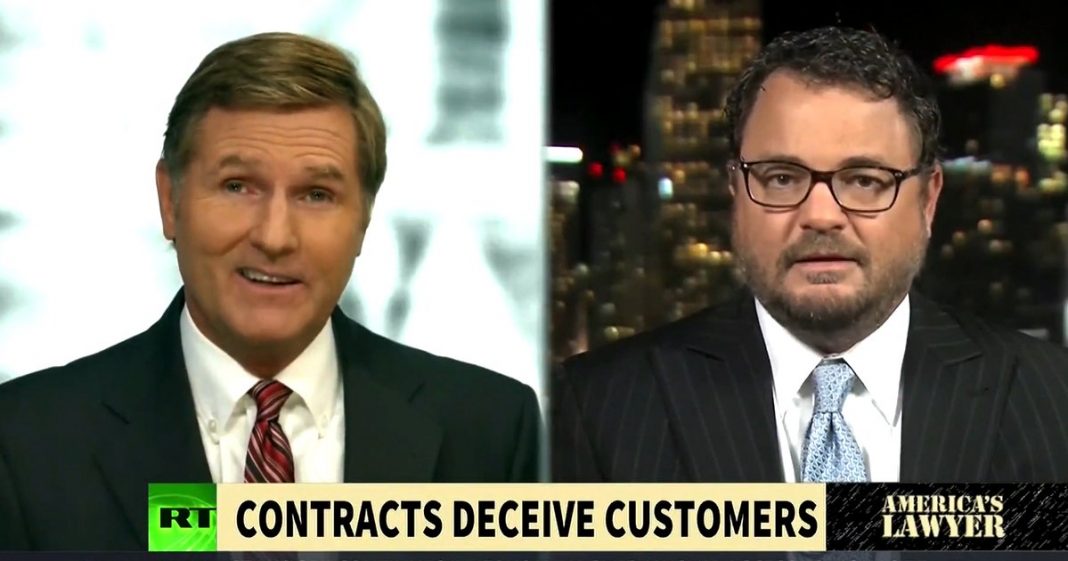 Via America’s Lawyer: Mike Papantonio discusses, how businesses have been stripping American consumers of their rights with binding arbitration clauses that they tuck into their contracts with attorney, Tim O’ Brien.

Mike Papantonio: One of the biggest scams ever collectively pulled off by corporate America is forced arbitration. To put it in its simplest terms – forced arbitration eliminates a consumer’s right to sue corporations when they deceive them. Millions of Americans have agreed to this by signing “arbitration clauses” in contracts; they’re in your credit card contracts, your cell phone plans, your car and mortgage loans – the list goes on and on as corporations are making sure that they’re the ones with a legal advantage over you, when they find themselves in trouble.

And when they do, that contract you singed won’t allow you to file a lawsuit or create a class action against them for ripping you off, instead, you’ll have to go before a panel of arbitrators to resolve the dispute. Unless you are a board member of one of these corporations, there is no way that these arbitration clauses will help you.

Usually corporations pick the arbitrators so they know they are going against a friendly audience. They also have the benefit of having almost endless money to drag out the process, where most consumers can’t even afford to hire a lawyer. And when you’re talking about small amounts of money, it can cost a customer more to arbitrate than they could ever get back in damages. And even if a consumer is willing to jump through the countless hoops corporations put in place, studies show that it is businesses win 80% of the time. The deck has been stacked against American consumers.

Now here’s a quick example of how this issue can hurt you personally – suppose your credit card company or cell phone company was overcharging you 5 dollars a month. And not just you, but 10 million people a month. Because you signed that arbitration agreement, you can’t join a class action lawsuit with the other victims. Instead, each of you has to hire your own lawyers for hundreds of dollars an hour just to get your 60 dollars back. You lose money in the process even if you win, while the corporation pockets 50 million stolen dollars.

Right now, the Consumer Financial Protection Bureau is trying to work on rules to prevent corporations from using these binding arbitration clauses in their contracts, but they are facing stiff opposition from elected officials in Washington, D.C. When you have both major political parties in the United States controlled by Big Business, you will always lose as a consumer. And that’s why corporations have been trying for decades to paint plaintiff’s attorneys negatively. Both Democrats and Republicans are owned and operated by Big Business and the US Chamber of Commerce. That’s why forced arbitration is a way corporations will be stealing from consumers for a very long time.

Tim O’Brien: Pretty simple. It’s two things. Number one, these clauses enable fraudulent corporate conduct. Number two, they facilitate, and let’s talk about what facilitate means. It means to make easy. These clauses facilitate, make easy, the hosing of the American consumer. That’s all there is to it; it’s plain and simple.

Mike Papantonio: What kinds of businesses and companies use these clauses and when did they become, really, widespread? I remember the US Chamber of Commerce started this jihad against both consumer lawyers, and at the same time that they were attacking consumer lawyers, so the person on the street simply didn’t have access to the court. That was their goal. They were also putting in place this arbitration idea. This is heavily drawn, heavily pushed, by the US Chamber of Commerce, those folks that we always believe is Mom and Pop grocery store down the street.

Tim O’Brien: It absolutely is. And there are very few guarantees that anyone, any attorney like me can ever make, but I can make this guarantee to everyone watching your program, Mike, and that is this: you are a subject of an arbitration clause. If you have spent any money in the United States over the last few years, you are part of an arbitration agreement. You don’t even know that.

So it’s everything from your credit cards to your cell phone to your cable bill to your Internet service provider to even the apps that you sign up for that you quickly accept. And unfortunately, there’s very little you can do. If you want that service, if you want to have a telephone in your house, then you’ve got to accept. You’ve got to put yourself into this arbitration agreement and waive your rights to a jury trial.

Mike Papantonio: It’s even worse than that, isn’t it Tim? If you think about it. Say Wall Street. Say some broker on Wall Street steals a million dollars from you. It’s your life savings. They steal a million dollars. They do that by messing with stocks and bonds that you own. Do you realize, and I think this is the ugliest thing about it, most people don’t know that you don’t get to take that thief to court. You have to take that thief to an arbitration panel where the thief gets to pick at least one of the arbitrators, and most of the time, it ends up being two of the arbitrators, and it’s totally stacked against you in favor of the thief.

Is that kind of where this whole thing is going on how the whole court system could end up there if we don’t pay attention to what’s happening with arbitration?

Tim O’Brien: It’s even worse than that, Mike. Actually, in a lot of these financial issues, so involving banks and credit cards, it’s a single arbitrator. And typically, that single arbitrator comes from a group called the National Arbitration Forum, which is an industry-funded group of attorneys where they select, they hand select who goes into that forum, into that panel of groups.

So you have one person, one person deciding what is your compensation, if any, and 90-some odd percent of the time, folks lose. But number two, what are your rights. It’s really … it is the encapsulation of the American kangaroo court, is the arbitration clause system.

Tim O’Brien: That’s exactly right. And what’s even worse is it can turn on the other side, too. So in other words, what are your rights against the company? Now say, as this has happened to many servicemen and woman who have served overseas, what happens, say, if there’s a debt. And perhaps that debt’s valid. Perhaps it’s not valid. Well typically that debt to be collected goes through a process, and you have the right to be heard about it. You have a right to contest the validity of the debt and that debt actually exists.

Many of the debts now or the supposed debts are also subject to this arbitration provision. So a company can involuntarily put you into an arbitration before a single arbitrator from this NAF, the National Arbitration Forum, and you’re overseas, fighting for our country. And you have no idea that there now is an arbitration judgment against you for a debt which you had no ability or even notice that you had the right to contest did that debt even exist. So it’s not just for protection; it’s for offense, and the corporations are using this arbitration provision offensively.

Now let’s say at the end of the year, they’ve stolen … let’s say, at the end of 10 months, you’ve figured out they’ve stolen $50 from you, so you go to get your $50 back, you have to hire an attorney that’s going to cost you $200, but the thief, who has stolen your money, has done it to 10 million people. So the thief … that those 10 million people can’t go out and hire their individual lawyers, and the thief also knows, the corporate thief also knows that you can’t join a class action, can you? Isn’t that part of the arbitration limitation?

Tim O’Brien: Absolutely. Nine out of ten of these arbitration provisions include class action prohibitions. The corporations know, they understand the theory of divide and conquer. They know that most American consumers cannot afford to go collect on a 60 or 100 or even 150 dollar debt or transgression against a corporation. But when you put these people together in a class action, there’s efficiency. There’s strength in numbers. And it can become a real, real issue for the corporation, because it could cost them tens and even hundreds of millions of dollars in order to compensate for this collective wrongdoing.

And the corporations know by busting that up, by dynamiting that ability of the American consumer to do that, they take away and they make a reality of these folks are never going to have their day court, or even for that matter, before an arbitration panel. It’s all by design, and right now, they are executing it perfectly.

Real quickly, is there anything a consumer can do about this, Tim? Anything at all.

Tim O’Brien: There’s very little that can be done right now. Right now, the Consumer Protection Bureau is trying to essentially ban arbitration clauses. And Congress meanwhile is trying to take that right away. So call your Congressmen. Tell them to support the Consumer Fraud Protection Bureau’s efforts to regulate arbitration clauses and consumer contracts.