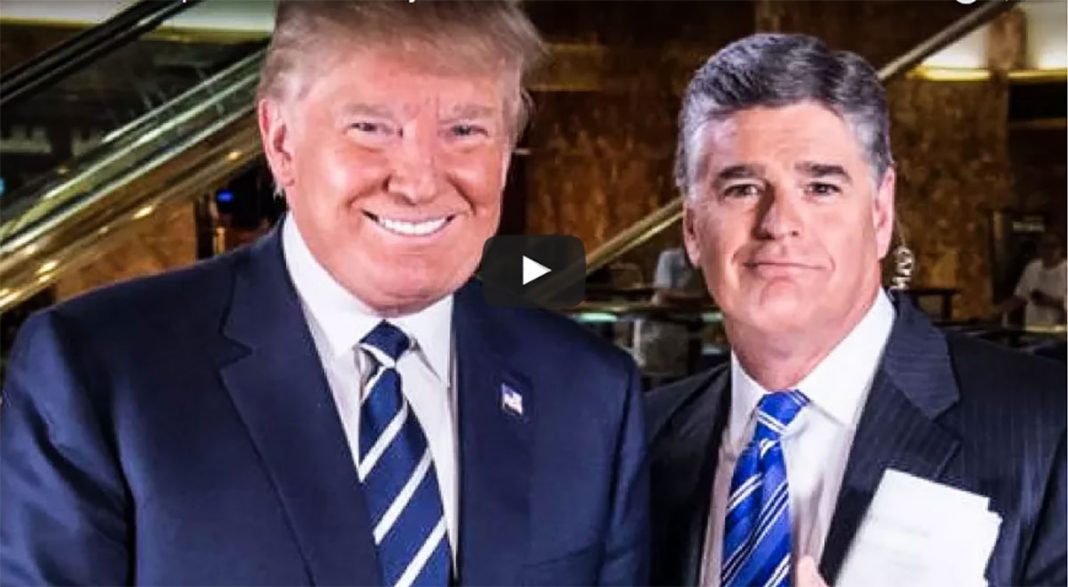 On Wednesday evening, Donald Trump and Sean Hannity enjoyed a quiet dinner together at the White House, along with new White House communications director Anthony Scaramucci and former Fox News executive Bill Shine. Hannity is one of Trump’s very few supporters in the media today, and it’s almost a certainty that he was there to pick up his latest rounds of talking points from the President. Ring of Fire’s Farron Cousins discusses this.

On Wednesday evening, Donald Trump decided to invite a dear friend to the White House for a personal and private dinner. That friend just happens to be Sean Hannity. On Wednesday night, Donald Trump, Sean Hannity, new White House Communications Director Anthony Scaramucci, and former Fox News executive Bill Shine all dined together at a private little gathering where the four discussed … we don’t know what … but I think it’s pretty safe to assume what happened at that dinner. You see, you don’t bring on Fox News’s highest-rated host and the new White House communications director if you aren’t trying to get that host to toe the line that the communications director wants them to toe.

On Fox News, Sean Hannity has been one of the staunchest defenders of the entire Trump administration. He has been one of the few people on that network still willing to go on there every single night and talk about the need to prosecute Hillary Clinton. He’s repeated Trump’s lies about illegal people voting in the election. He has defended every member of this administration, is on Trump’s side in the Jeff Sessions feud. Sean Hannity is absolutely, at the moment, Donald Trump’s best friend and, quite honestly, one of his only friends. The fact that the new communications director was there should basically terrify you at this point because there’s no question that your communications director would be present at this meal unless you wanted him to give direction to Sean Hannity, and that is most likely what happened at this particular dinner.

Now, could you imagine what would happen if Barack Obama had invited Rachel Maddow to the White House for a private little gathering with just him and maybe an MSNBC executive and their communications director. The right wing would be freaking out nonstop for months over that. They would accuse the president of definitely giving her talking points. Well, in this particular instance, with Hannity and Trump and Scaramucci and Shine, there is almost no question that that is what happened here.

They want Sean Hannity to keep defending the president, again, because he’s got one of the largest audiences on Fox News, even though that audience is dwindling. They know that if Hannity abandons him, the Republican base is also going to abandon him. That’s why they’ve got to wine and dine him, treat him to this fancy little man date, and tell him what a valuable asset he is. At the moment, that is exactly what Hannity is. He’s not a friend. He’s not an ally. He’s an asset to the Trump administration. He’s the only person willing to go out there, put all dignity and ethics aside, and defend to the death all of the horrible lies coming out of the Trump administration.

Now, there’s also another possibility. It might be that Scaramucci and Trump were trying to offer Hannity a job. It’s obvious that they haven’t been happy with the jobs of Bannon and Reince Priebus and Kellyanne Conway and Sarah Huckabee Sanders, pretty much every single person within the White House, so is it possible they were discussing a potential position for Sean Hannity in the Trump administration? Perhaps chief of staff? Perhaps the new press secretary? Who knows? All we know is that Sean Hannity is Donald Trump’s closest friend, which typically means you shouldn’t trust a word that comes out of Sean Hannity about anything that went on during that meeting.