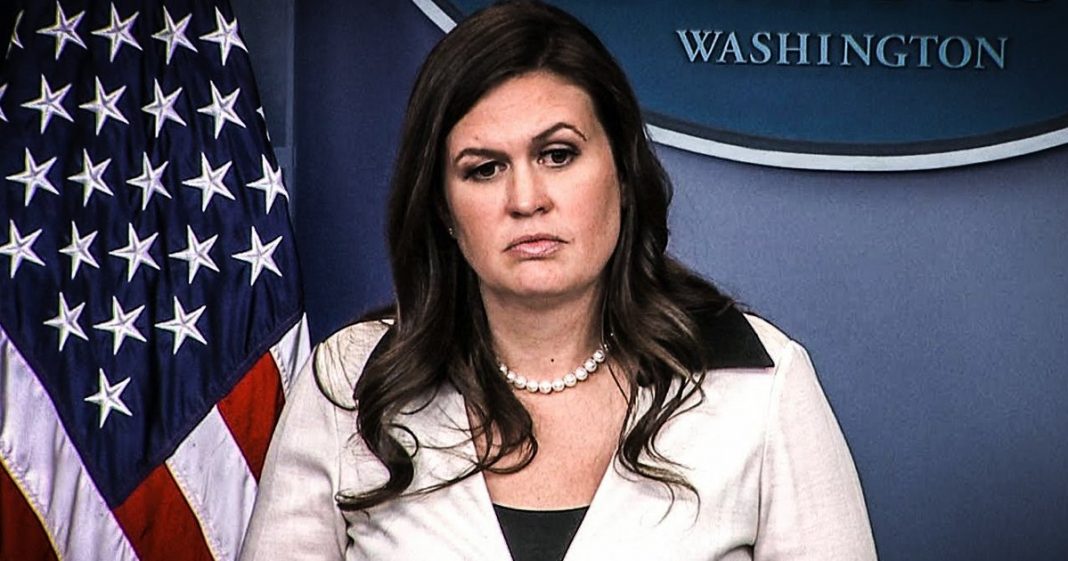 By now we’ve all heard the story of 9-year-old Dylan “Pickle,” the Trump supporter who wrote a letter to the President that Sarah Huckabee Sanders read aloud during Wednesday’s press briefing. Twitter ripped the Administration to shreds over the letter, mostly questioning the authenticity, and for using this as a tool to distract from their disgusting policies. Ring of Fire’s Farron Cousins discusses this.

By now, I’m sure most of us know that on Wednesday in a White House press briefing Sarah Huckabee Sanders opened by reading a letter from a nine-year-old child named Dylan, who goes by the name Pickle. Pickle, in the letter, talks about the fact that he loves Donald Trump. He had a birthday cake shaped like his hat. I’m assuming hat means that bad hair piece that Donald Trump wears. And he went on to say, “I don’t know why people don’t like you. How much money do you have? How big is the White House?” You know, typical questions that a child who is under the age of nine would ask a person. Here’s the thing about the letter. I don’t necessarily want to debate the authenticity of it, but when they shared the picture of it, if it was indeed mailed to the president, wouldn’t there be creases in the letter? Wouldn’t the little notches out of the side of the paper on that left-hand side not be digital? I mean, I don’t want to come across as like a Pickle-truther, but that document that they shared was clearly created on a computer.

Now, having said that, it is entirely possible that this child did it, even though the spelling and grammatical are well below what a nine year old in this country could do. However, that could just be the result of shoddy Republican funding of our public education system. Who knows? But, it does seem a little bit like a caricature how somebody who’s older would portray a nine year old as writing. Nonetheless, all of that aside, let’s assume for a second this is authentic. The fact that Sarah Huckabee Sanders opens a press conference with a letter from a nine-year-old boy fawning over Donald Trump on the same day that the administration decides to ban transgendered people from the United States Military is a clear distraction method. Donald Trump got a lot of hate yesterday because he spread a lot of hate. So Sarah Huckabee Sanders, and I’m assuming Anthony Scaramucci was behind the scenes pulling the strings, decide to open up with a letter showing just how great Donal Trump is and he’s reaching out to children and the children love him and let’s just be nice to him because that’s what the children want.

No. That’s not how this works. You don’t get to go out there and misdirect the public with a cute little misspelled letter from a nine-year-old boy who may or may not even be real. You need to start addressing the issues, and if you’re not even going to bother doing that, then the press needs to wise up and stop attending these disgusting charades that you’re calling White House Press Briefings.