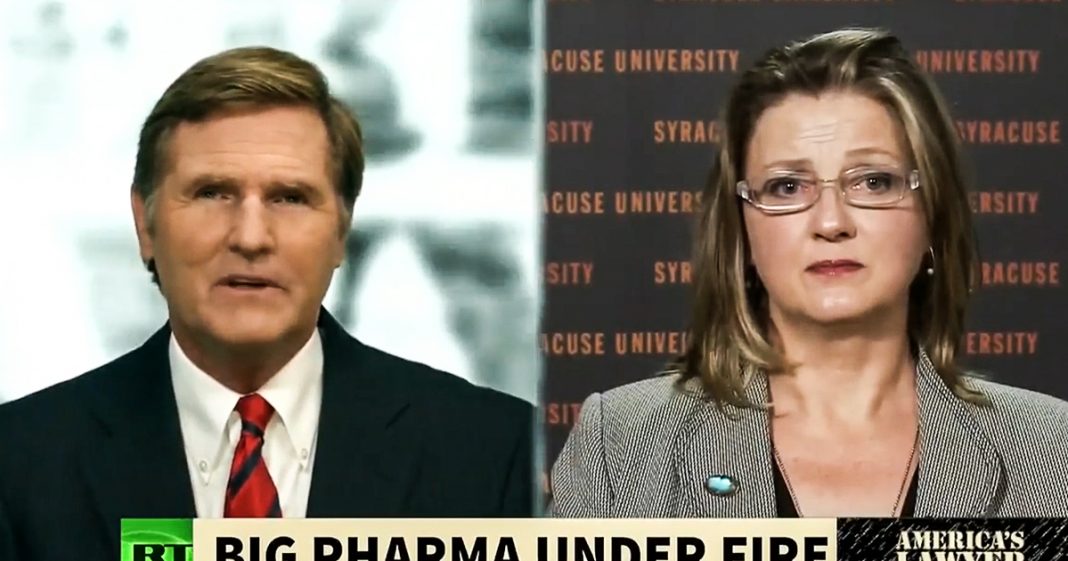 The pharmaceutical companies that make and distribute opioids are facing a growing wave of lawsuits for the destruction their pills has brought on to the public. At least 25 U.S. states, cities and counties filed civil cases in the last year. Two notable recent cases come from the attorney generals of Missouri and Ohio. This is following years of the government and pharmaceutical firms failing to control the opioid epidemic.

America’s Lawyer host Mike Papantonio speaks to the Executive Director of Truth Pharm, Alexis Pleus, about the opioid crisis and the multiple lawsuits now weighing in on Big Pharma for creating it.

Mike: The pharmaceutical companies that make and distribute opioids are facing a growing wave of lawsuits for the destruction their pills have brought onto the American public. At least 25 American states and cities and counties filed civil cases just in the last year. Two notable recent cases come from Attorney Generals of Missouri and Ohio. This is following years of the government and pharmaceutical firms failing to control the opioid epidemic that they created.

As you might expect, it’s always about obscene profits for corporations. For more on this, I’m joined by Alexis Pleus, Executive Director at Truth Pharm. Why do you think these pharmaceutical companies, Alexis, have refused to take action against the effects their drugs have had on people to the point that state attorneys are having to go after them. What’s going on here?

Alexis: Well, there’s a really simple answer to that question. Profits are just too good so far for the prescription companies to respond to this in the appropriate manner. Until we hit them in the pocketbooks and make them suffer the consequences of their actions and decrease their profits, we’re going to continue to see their actions remain the same.

Mike: Well, as of today, Alexis, nearly 180,000 overdose deaths have taken place. To put that in perspective. That’s a startling number. That’s three times the number of Americans killed during the Vietnam War. Considering this fact, why do drug companies … I mean don’t they owe something to the American public to try to make this right? I’m really concerned more about why the Department of Justice themselves … Why aren’t they going after … These people are just one shade away from involved in what’s like organized crime to me when you really analysis this. What’s your take?

Alexis: Yeah. Well, it seems that a lot of our elected officials are controlled by the pocketbooks of the corporations, and so the pharmaceutical industry has lobbied heavily to have their way with these medications and continue with the profits. Until the government recognizes that our cost as a people and the tax payers are paying greater cost to respond to this opioid epidemic then they’re benefiting from the pharmaceutical industry, I don’t think that anything is going to change.

All of these lawsuits that are taking place are definitely necessarily but was also need to educate the public about the effects of the opioids on the patient’s who are taking them even for what they consider like legitimate reasons. There are also impacts to those individuals even if they don’t view themselves as being addicted to a medication.

Mike: You know I know quite a bit about the idea of educating. I was one of the attorney’s that handled the tobacco litigation. That was something that was supposed to have come out of that, and to some degree it did. The real problem here … Don’t we have entire blighted communities? I mean we have communities, they used to be wonderful places for people to live. Great quality of life. It was just middle America. Everything was wonderful. Places like Southern Ohio, Kentucky, West Virginia where it was really a wonderful place to live.

Now you have these blighted communities that there’s been … They actually refer to as Zombieland. I’m sure you’ve heard the term but it’s Zombieland because everything is so dysfunctional. The truth is if you look at the numbers, and you look at the … where these opioids came from, there was no question that these corporations knew exactly what they were doing to those communities. So there’s a cost, isn’t there to make these communities right again? Beyond just educating. I mean you got a lot of cost for health issues that have got to be figured in here in these lawsuits. Don’t you agree?

Alexis: That’s right. If you look at the mapping of the United States and where opioids have been prescribed the greatest, those numbers actually correlate with the greatest number of overdose deaths. Then if we look a little bit further and we can look at hot spots of where there are great overdoses within cities, a lot of times you’ll see those hot spots concentrated right around hospitals and medical communities where opioids are prescribed the most.

We can see who’s causing the problem and now it’s time for us all as a nation to respond to this appropriately, which is holding the pharmaceutical industry responsible, making them pay the cost of how this is effecting our society. We’re losing loved ones to overdoses, so families … Children are losing their parents at an alarming rate. We have children being orphaned by this epidemic. We have people being incarcerated for what we know is a medical condition.

Mike: Okay, so let’s assume that’s one of the cost along with the other costs as you described. There’s court costs. Some communities that have been raised as much as 30 to 70 million dollars just handling dependency cases. Taking children away from parents. The police cost of having to deal with … build special units to take care of these problems. There’s been hospital costs where county hospitals paid for by tax payers has had to expand what they do to deal with overdoses and rehabilitation or whatever the care may be.

These costs are real costs. There’s some communities that we’re seeing that are paying as much … It’s costing as much as 300 million dollars because of the opioid crisis that was intentionally … On some level there’s intent here. There’s no question in my mind that there’s intent where the company knew what was happening but continued to do it anyway. That’s intent. You have communities that were covered up with this, but it’s costing 300, 400 million dollars simply to get right again. Do you see the companies coming to the table without lawsuits to pay for the damage they’ve done?

Alexis: Oh, absolutely not. They are not coming to the table to pay for these costs. They’re not coming to the table to respond in an appropriate manner. If they want to continue marketing their products as if they’re effective for chronic pain, why aren’t they producing any studies that prove that? There has not been one single study that has proven that opioids are effective to treat long-term chronic pain. Yet they still market them and prescribe them for that.

They are not coming to the table in any way whatsoever. We have to continue to have these lawsuits, unfortunately, which take time and also cost the tax payers money. That is apparently the only way that we’re going to be able to move forward in changing their behavior in this epidemic. We also, as I mentioned before-

Mike: Yeah, there’s another way. It is to … There’s another way, and that’s to throw the CEOs and some of the people involved in prison for what they’ve done. That’s what the Justice Department should have already done. They haven’t done it. They need to be very aggressive on this. When some folks to go prison and have to do a perp walk, this problem will take care of itself.

I want to tell you this. Thank you for joining us, and keep up the great work you’re doing out there. It’s very, very important.

Alexis: Thank you so much. I appreciate it very much.